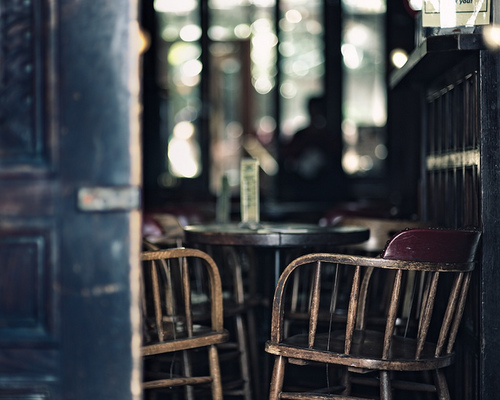 They have you sign in blue ink. And blue was always my favorite color.

I remember thinking that as I scribbled my John Hancock on the thin black line on the second to last page of the stack of divorce papers sitting in my lawyer’s lobby. With the swift motion of a blue ballpoint pen, I recorded the shortest marriage in the history of my family. But it wasn’t disappointment or shame that I felt when I signed “Alexandria Rash” onto a piece of copy paper that had been signed by thousands of other couples. I felt good. I felt free.

I had this idea of the person that I was supposed to be at 25 years old. This idea that involved kids and a husband and a house in the suburbs. An idea of this standard that I was supposed to meet by my first quarter of a century on this planet. An idea that I didn’t even really want at 25. An idea that I had never dreamed about as a teenage girl. And as I conformed to this idea, I felt the straightjacket tighten around me. And then one day…it was so tight that I couldn’t breathe.

It wasn’t a decision that came lightly. Leaving. I spent months thinking that I should suck it up and join the crowd, everyone is miserable. That’s a thing right? I spent weeks being mad at him and myself and the world for decisions that I had made. And I spent a few days seriously considering running away. At 25. Running away like a 13-year-old kid… at 25. And then I decided. And I swear to the heavens, it’s the best thing I ever did. Because after that, the world that I thought had completely disappeared from sight began to open up again.

I’m not anti-marriage. Or anti-love or anti-trust. I think some people cross paths and they are meant to travel down that road, hand in hand, for the rest of their meaningful lives…but some people aren’t. A lot of people should shake hands and part ways, but too many stand on the sinking ship, determined to sleep at the bottom of the ocean with her. And a lot of people wake up at 60-years-old, next to a person they used to know, and wonder where their life went. I am 100 percent anti-that. I’m anti-wasting away just because you think miserable is normal. Miserable is never normal. And I’m anti-asking anyone to do that for me too. I don’t want anyone to love me just because they are legally-bound. Love just doesn’t work that way.

It’s not lost on me that I put a lot of people out with the choices that I made. My parents got the brunt of the fallout, defending their oldest to family and friends. Giving a brave face in public when they weren’t exactly bursting with pride. They’ll probably never know how much I appreciated that.  Some of our friends found themselves placed in an awkward situation, not sure how to talk to one or both of us. And I wore black wool into every family event this summer. But I always told myself that if they only knew how heavy the world felt sometimes. If they knew I couldn’t breathe sometimes. They’d understand. And being able to breathe again made it okay for me even if they wouldn’t.

Today, I write down one good thing about the day before I go to bed. Every day. To remind myself that one bad decision doesn’t derail the whole train. There are so many good things in this life (in my life) to be thankful for. I try to make sure that I really appreciate what I have…because my cup is so full. To make sure that I never go back to a place where I can’t see the light in a dark situation.

The best things in life don’t usually run with the handbook, they are rarely planned out and clean-cut. The best things in life hit you out of no where. They come on a Tuesday afternoon in the middle of a boring week. They fall in your lap when you’re sitting on the ground of rock bottom. They meet you in the sky when you are flying high above the rest of the world. I am open to it all. The good. The bad. The downright ugly. Because that’s life. Every single experience makes up this mosaic that is laid to rest with us at the end of the line. It might as well be as colorful as you can possibly make it.

And blue is still my favorite color.

It’s been awhile since I’ve written…well that isn’t completely true. I have written this post a million times (slight exaggeration). I’ve deleted it just as much. I’ve stared at the white space of an empty document, shining from the light of my computer in the middle of the night. And here I am again.

This year has been a whirlwind. So many things have changed. A lot of fun. A lot of new experiences. And a few mistakes along the way. Some bigger than others. I’ve written and rewritten this post because I felt like I needed to give some sort of explanation of the way I’ve been living my life. And after deleting this document one last time, I realized that I didn’t. That I couldn’t even if I had to. There is no solid explanation when you’re so unhappy that the only decision available is to not be anymore.

Lately, I have constantly been on the run. Whether I’m jumping into the lake or out of a plane, my world has been continuously moving. I’ve made new friends. I’ve dedicated more time to old ones. I’ve seen someone take their first breath. I’ve stood by after others have taken their last. I’ve had the absolute pleasure of being surrounded by more beautiful souls than I ever could have imagined. I’ve done a hundred things I never thought I would and it’s only August.

And when I say “I’d like to put my head in an alligator’s mouth” or “Do you think I can climb that?” and the people around me shake their heads and ask if I have a death wish, the truth is that I don’t. I have no desire to die. All I want to do is live.

I want to taste and feel and breathe in everything life has to offer. I want to love others too much. I want to be kind and reliable and make life for the people that I love just as enjoyable as I want it for myself. I want to be selfish and selfless. I want to find myself while being completely lost. I want to look into the darkness that surrounds the world sometimes and only think of how beautiful the stars are. I want to be a better human. I want to always grow and improve and be unfinished.

I’m going to live life like it is my greatest adventure, because it is. I’m going to climb mountains. Jump from high places. Pet large, powerful animals. Meet new people. Try new food. Buy a plane ticket somewhere and just go. Do something every day that scares the hell out of me. Go to bed reminding myself of one good thing that happened that day, even on the bad ones. Erase the expectations I had for where I should be by now and just focus on where I’m going. You get so many breaths and so many days and a limited number of heartbeats, it is a disservice to waste them.

I have no idea where I’m going. I have no idea what I want. But right now…personally, professionally, spiritually…I am so good. I just want to take in every sensation I possibly can. I hope I never know for sure what my next move will be. I hope I’m always just floating on the wind and enjoying the ride.

As far as explanations are concerned, this is literally all I have. Life is too good to waste it.

Eyes on this page.